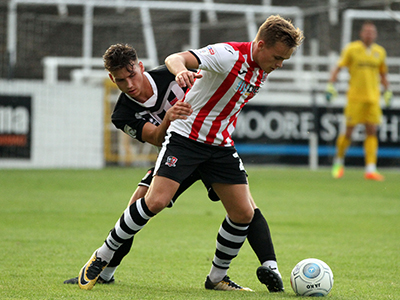 City’s unbeaten pre-season came to an end this evening as a single goal just after half-time was enough give Exeter City a 1-0 victory at Twerton Park. Despite the result it was another promising performance from City against a strong Grecians side, who only last week put six goals past Vanarama National League South rivals Truro City. In fact, it was City who twice went close in the opening exchanges, both times with headers from corners. First, Jack Batten saw his effort blocked on the line by Taylor then Robbie Cundy couldn’t direct a similar chance on target. The League 2 side began to enjoy the better of possession after this but couldn’t fashion too many clear sights of goal. Both sides had decent chances as half-time approached, Andy Watkins making space to test keeper Pym with a low shot then Holmes crossing for Stockley to head just wide of Clarke’s goal. However, he was beaten within two minutes of the restart as neat build-up play from Stockley and Woodman set up Jay to slot the ball into the net. Regular substitutions from both sides after this disrupted the pattern of the game but City continued to match their higher level opponents, with chances arriving at both ends of the pitch. And City almost grabbed an equaliser in the final minute when Pym had to dive full-length to keep our James Ollis’ well-struck shot.