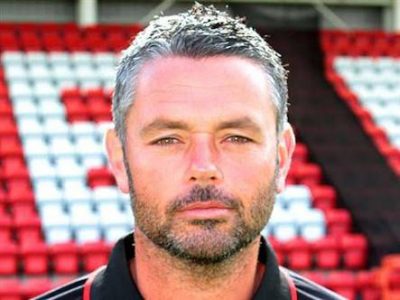 The Board of Bath City Football Club is delighted to announce the appointment of Jerry Gill as the Club’s new First Team Manager. Jerry, a former City player, brings a wealth of playing and coaching experience having gained promotion to the Premier League with Birmingham City as a player, and coached the Under-18s and Under-23s at Norwich and Under-18s at Wolverhampton Wanderers.

Gill’s appointment follows a thorough recruitment and interview process that considered a number of high calibre candidates. Commenting on the appointment, Chairman Nick Blofeld said, “We’re really excited to have Jerry join us as our new Manager. He’s a very talented coach who has worked with some of the best managers and young players in the country, and is well thought of throughout the game.  Now is the right time for him to step up to first team management with our strong, experienced squad. We’re really looking forward to him joining us and building on our strong league position.”

Gill added, “I’m delighted to re-join Bath City as manager.  The Club have always had a big place in my heart and it’s great to get the chance to manage the team here. I’m confident that I can use my knowledge and experience to help develop the team and will also look to strengthen the squad a little and build on the firm foundations that already exist here.”

Football Chairman, Paul Williams, added “In conversations with Jerry since the interview process began I have been impressed with his vision and plans for the future of the Club and I look forward to working with him”.

The Club also confirms that Jim Rollo will retain his position at the Club as Assistant Manager, and want to thank him again for his interim management.  There are no other changes in the coaching team.

Jerry enjoyed a highly successful playing career encompassing over 200 appearances for Bath City and 56 at Yeovil Town before he made the step up to five years at Birmingham City and promotion to the Premier League. He went on to play at Northampton Town, Forest Green Rovers and 209 appearances for Cheltenham Town including another successful promotion campaign.

Following retirement as a player, Jerry coached in Non-League with Forest Green Rovers before moving into youth team development at League level. He has held roles at Bristol Rovers, Birmingham City and Kidderminster Harriers, with his major appointments being at Norwich City as U18 and U23 Lead Coach and then Wolverhampton Wanderers as U18 Lead Coach.

Jerry has held the FA UEFA A Coaching Diploma for 5 years.