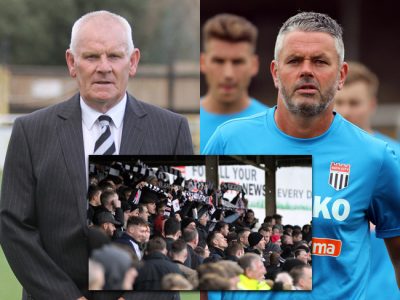 It’s another big day at Twerton Park this coming Saturday as 5th placed Bath City welcome league leaders Wealdstone for a mouth-watering match. With The Romans unbeaten at home since August and the visiting Stones having only suffered three defeats all season, it’s a clash of two of the league’s top teams.

Twerton-born director, John Reynolds, issued a rallying call to City fans this week. “We’re having a great season and playing some of the best football I’ve ever seen at Twerton Park – and that’s over 60 years man and boy. We know they’ll bring a lot of fans, so I’m asking for the people of Bath to make the effort to come down to Twerton on Saturday and make sure we more than match them with our vocal support for the team. This is a great team that Jerry (Gill) has assembled, with young lads playing out of their skins. And the sight and sound of a packed Twerton Park in good voice could be just the extra boost they need to get a win on Saturday. Up the Romans!”

Team manager, Jerry Gill, added his own appeal. “It’s great that so many people are making a habit of getting along to Twerton Park on a regular basis these days. To see that crowds are up another 10% so far this season is terrific. I know they’re all big matches, but this really is a big one and the fact they’ll be well supported means I’m really keen to see the Roman Army out in numbers. So please can everyone make that extra effort to come along and to bring their mates. It really is a special place to be under the lights and with a rocking atmosphere – and it transmits straight to the boys on the pitch. See you Saturday.”

Buy tickets in advance at www.bathcityfc.com/tickets for fast, cash-free entry, or pay on the gate.