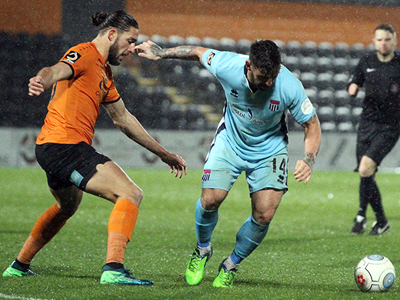 Having given themselves a mountain to climb after conceding three goals in the opening 23 minutes, City almost scaled the peaks of recovery before exiting the FA Trophy at the hands of Vanarama National League side Barnet. Heavy traffic around the Bees’ impressive The Hive Stadium meant a late arrival for City and a 15 minute delay to the kick-off but it was the hosts who were clearly buzzing to get started, as Fonguk curled home from 18 yards with just 51 seconds on the clock. Then on nine minutes Duku slid home a second goal from Mason-Clark’s cross. Further chances fell to Barnet before Sparkes crossed for Mason-Clark to turn the ball home in the 23rd minute and it looked like it could be a horror afternoon for the Romans. However, eight minutes later the ball broke to Michee Efete on the edge of the Barnet box and he drove it past Cousins to give City a lifeline. The second half opened with a great chance for Deon Moore but he fired wildly over the bar with just Cousins to beat. Ryan Clarke produced a couple of smart saves as Barnet looked kill the game off then on 63 minutes a exquisite through ball from Joe Raynes saw Anthony Straker cross for Adam Mann to fire the ball into the roof of the net. To their credit the Bees didn’t panic despite seeing their lead cut to a single goal and they denied City any further clear sights of goal whilst continuing to create chances of the own. So in the end they held on with few scares to leave City reflecting on the slow start that ultimately cost them their FA Trophy hopes for another season.