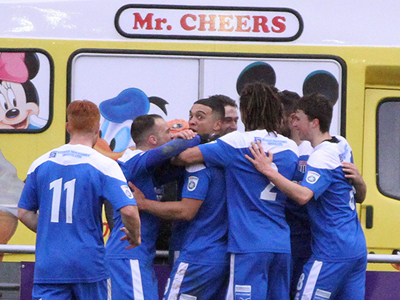 City produced one of their best performances of the season this afternoon to beat play-off rivals Braintree Town 2-0 at a damp Cressing Road. Both goals came during a one-sided first half as City made light work of the heavy playing surface to pass the ball around confidently. A couple of half chances had come and gone before Anthony Straker’s 23rd minute shot was only parried by keeper McDonald and Nat Jarvis stabbed the loose ball home. Then nine minutes later City made it 2-0 with a stunning 30-yard curling shot that gave McDonald no chance. Compton’s free-kick was pushed around the post by McDonald as City continued to boss the game before the break. The opening period of the second half saw the Iron enjoy the majority of possession but fail to trouble Luke Southwood in the City goal. Once they had weathered this spell City began to threaten again, Ross Stearn and Frankie Artus both seeing shots clear the bar. City now looked content to see the game out and the fact that it wasn’t until stoppage time when Southwood’s claim of a free-kick saw the keeper called into action, showed how comfortably they achieved this aim.