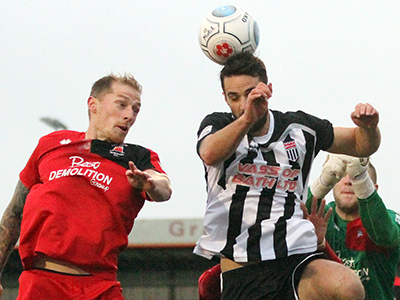 City overcame a late scare to make it back to back wins with a 3-2 success at a wet and windy Eastbourne Borough this afternoon.With an unchanged starting XI, City looked to build on their big win over East Thurrock United last weekend but they had Luke Southwood to thank for an early double save as the home side started the game well. However, City soon got on top and deservedly took the lead on 37 minutes when Nat Jarvis’ turn and shot from inside the six-yard box found the net. They failed to take this advantage into the break though as Dawes was given too much space to head home a 45th minute free-kick. City regained the lead in the 68th minute when a great cross by Miles Welch-Hayes was turned into his own net by Khinda-John with Jarvis waiting to pounce behind him. And when a corner dropped to Welch-Hayes with just eight minutes left to drive home City’s third goal the game looked over. Five minutes later though Dawes’ shot made it 3-2 – leading to a bizarre pitch invasion from a small number of home fans – and then Simpemba looked to have levelled in the final minute only for Tom Smith to clear his header off the line. Southwood then saved another Simpemba header before City finally managed to see out the remainder of stoppage time and claim the three points.