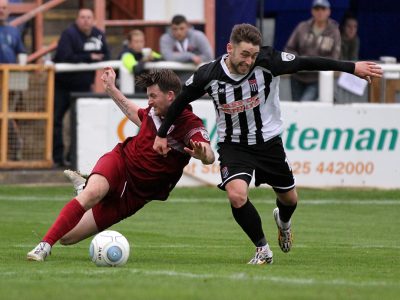 City and Chelmsford City will both go into Monday evening’s draw for the FA Cup 1st Round proper after they drew 0-0 at Twerton Park this afternoon. City were left to rue a penalty miss by Jack Compton early in the 2nd half, although the visitors could point to three great first half chances that could have put them out of sight before the interval. City started the game brightly, passing the ball around well and pushing the Clarets back. This almost paid off on seven minutes when keeper Beasant failed to hold an Andy Watkins shot but Nat Jarvis could only stab the loose ball the wrong side of the post. Slowly Chelmsford began to get into the game and a neat back heel in the 21st minute saw Church slip the ball past Luke Southwood only for Ryan Case to clear the ball off the line. Seven minutes later City had another escape when Barnard crashed a shot against the bar. Then the half ended with a long clearance dropping to Barnard but he blazed his shot high over the bar with only Southwood to beat. The second half was just two minutes old when Watkins was sent crashing to the ground in the box and the referee pointed to the spot. Compton stepped up but saw his well-struck effort hit the left-hand post. Neither side could get on top after this and as the second half progressed Chelmsford increasingly looked happy to slow the game down and take City back to Essex for a replay. And, although there was several half chances at both ends, they got their desire and the sides will try again at Melbourne Stadium on Monday evening (ko 7.30pm).