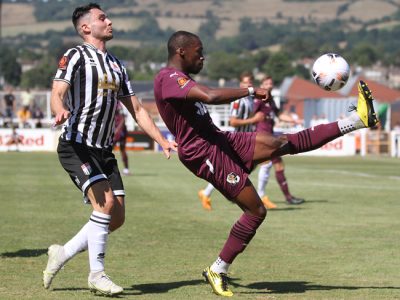 Two goals in five second half minutes condemned City to an opening day defeat against Dartford at a warm and sunny Twerton Park this afternoon. The Romans shaded the first half before last season’s play-off competitors upped their game after the break to run out deserved winners. An early shot by Luke Spokes was blocked by a defender but this was a rare effort on goal by either side in the opening 45 minutes. City were enjoying the better of the possession but couldn’t convert this into clear cut chances. Late in the half a free Jordan Dyer header almost caused panic in the Dartford area before penalty appeals were waved away when Elliott Frear went to ground in the box. The visitors had shown little as an attacking threat during the opening half but immediately looked more dangerous after the interval. It took a Zac Bell goalline clearance to keep them out on 51 minutes before Joe Wright did well to smother Odaudu just past the hour mark. However, on 66 minutes a long cross-field ball saw Fonkeu hold off Bell and drive a shot past Wright. Five minutes later another incisive move by the Darts saw Bell divert the ball into the net to double their advantage. City pressed for a way back into the game after this double blow but Dartford stood firm, with just a late chance for substitute Scott Wilson coming close to giving the home fans something to cheer.