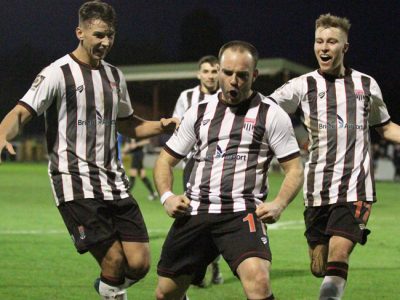 Ross Stearn’s stunning injury-time strike saw City narrowly beat Billericay Town by two goals to one at Twerton Park this afternoon. Just as the game looked to be heading to a share of the points the substitute collected the ball 18 yards out before unleashing a great right foot shot into the corner of the net to spark ecstatic scenes on and off the pitch. The goal was probably harsh on the visitors who belied their lowly league position to give City a stern test. City did have the ball in the net on just five minutes but Tom Smith’s close range finish was ruled out for offside. And it was Billericay who struck first on 24 minutes. An unmarked Noel-Williams looked to have wasted the chance with a weak header but somehow the ball squirmed out of Ryan Clarke’s grasp before trickling into the net. The lead only lasted six minutes though as the ball broke to Frankie Artus to stroke home a shot from 20 yards for his first goal in 23 months. City began to enjoy more possession after this but struggled to create any further clear openings and this pattern continued into the second half. And, as the game wore on, with Billericay having played half the number of games City did over the Christmas/New Year period they began to look the more likely side to grab a winner. However, instead it was Stearn who popped up with his 49th goal for the Romans to maintain City’s 100% start to 2020.