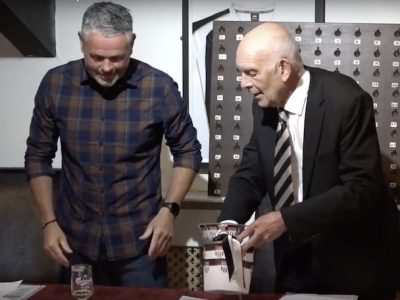 The Bath City Shirt Sponsorship Draw took place on Wednesday evening at Twerton Park. Manager Jerry Gill (pictured with Bob Chester, above) gave the assembled entrants a review of the past season and some hints of his planning for 2022/23, before turning his attention to the main business of the evening.

From a total of 68 entries into the Draw, Jerry drew the following winners:

Winner: Belvoir Castle who will have their name on the front of Bath City’s home and away shirt for the coming season.

2nd Prize:  TimWeaverBooks.com who will have their name on the back of Bath City’s home and away shirt for the coming season.

3rd Prize: BWW Communications who will have their name on the shorts

4th Prize: Novia Financial plc who will have a match sponsorship, for a League game, for 6 people during the coming season.

5th Prize: Newbridge Auto Centre who will have a hoarding on the Popular side of the ground

6th Prize: Allen Kia who will have a ball sponsorship, for a League game, for 6 people during the coming season.

Congratulations to our winners and thank you to all the entrants who supported the club so generously. The new home and away kits will be unveiled in the next few weeks…

Jerry and Bob Chester visited the proud winners on Thursday afternoon, just down the road from Twerton Park, and Jerry is seen flanked by the delighted Claire Buhr and Steve Birchall of The Belvoir Castle. Claire and Steve enthused, “In the 9 years that we have owned the Belvoir Castle, we have supported Bath City Football Club and we are thrilled and proud to be the Shirt Sponsors for the 2022/23 season.”
The ‘Belvoir’, as it is affectionately known, is a traditional local pub, with a large beer garden, snug and function room/sports bar, all available for hire. All major sporting events are shown across our 9 large screens with both Sky and BT Sport.
We serve food from our fish and chip shop ‘Pollocks of Bath’, which is located within the pub and we serve many Bath City supporters on their way home after matches.
www.thebelvoircastle.co.uk
www.pollocksfishandchips.co.uk 2nd Prize Winner Tim Weaver said, “As a life-long Bath City fan, I’m absolutely thrilled – and incredibly proud – to have my website printed on the back of the shirts next season. Thank you to everyone at the club for giving me the opportunity –  and to Jerry for picking me out of the hat in the draw!”

Tim Weaver is the Sunday Times bestselling author of 13 novels. He has sold over one million books in the UK, is published in 18 countries, and has been nominated for a National Book Award. Jack Reacher creator Lee Child is a fan, calling his books “brilliant”, and Tim’s been critically acclaimed too with the Daily Mail referring to him “a serious talent” and “one of the UK’s most respected crime writers”. As well as the books, he’s also written an original TV series and is currently developing it with the team behind Line of Duty. Nick Foot of 3rd Prize Winner BWW Communications told us, “I’ve never enjoyed football more than since I’ve been a regular at Twerton Park – not even when I saw Arsenal win the FA Cup at Wembley. With Bath City, the experience is real, tangible, sometimes almost visceral. Best moment? Cheering in Tyler Harvey’s injury-time winner! We love standing on the terraces, shoulder-to-shoulder with old and new friends, and feeling the connection with our local team. Even during this recent difficult season, I’ll never forget the elation of the win at Hungerford which set us on our way to safety. Therefore, it’s only proper that Hilary and I – through our company BWW Communications – should participate in the annual Bath City shirt sponsorship. BWW is a full-service, B2B marketing communications company supporting the global electronics industry.

When we won the main prize – a singular honour – it was during the ‘Covid season’ but we still get a buzz when we see those shirts turning up in the crowds. Now, to have won third prize we feel doubly lucky and are looking forward to seeing the team in action after the summer break with our logo on the shorts. Next year we’re hoping to get our name on the socks!”