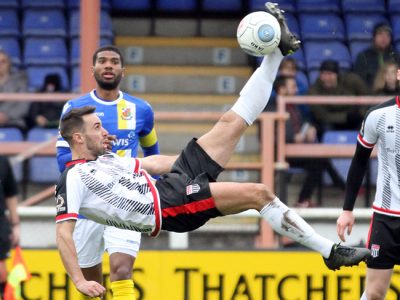 For the second time this season City and Wealdstone shared the points following a 1-1 draw at Twerton Park this afternoon. There wasn’t the high drama of the 3-3 game in London back in November but it was another important point for City to consolidate their play-off spot. Although the worst of the recent storms didn’t descend on the game, a swirling wind made it difficult for both sides and it wasn’t until the 18th minute either keeper was called into action, Ryan Clarke producing a great stop to keep out Allarkhia’s shot. In response Frankie Artus tested North with a spectacular overhead-kick. The visitors grabbed the lead on 28 minutes when a weaving run by Allarkhia ended with his cross being diverted into the net by Robbie Cundy. Wealdstone were happy to slow the game down after this and although City enjoyed the majority of possession for the rest of the half they couldn’t fashion any clear openings. That pattern continued after the break but the introduction on the hour mark of loan striker Sol Pryce for his debut finally got City back in the game. He’d already been denied by North then seen Okimo block his follow-up effort but from the resultant corner he rose highest to power a header into the roof of the net. Knowing that they really needed a win to keep in touch with the play-off places this forced Wealdstone back on the offensive which led to a more open final half-hour. Both sides built promising positions but the opposing defences stood firm, with only Freddie Hinds’ stoppage time shot that was charged down by Okimo threatening a winning goal at either end of the pitch.