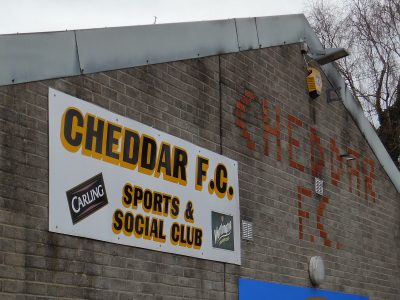 City progressed into the Somerset Premier Cup 2nd Round this evening with a narrow 2-1 win over Western League Division 1 side Cheddar FC. All the goals came in the first half of the tie at Bowdens Park. With 22 minutes on the clock George Rigg’s long range effort found the net to register his first goal in City colours and when, with four minutes left in the first half half, Jamie Lucas made it 2-0 it looked like it would be a comfortable night for the Romans. However, within a minute Maggs’ curling shot beat Jojo Wollacott to get the Cheeseman back into the game. With City’s line-up including just one player who started the league match at St Albans City on Saturday the second half was a less eventful affair. City did have a number of chances to extend their lead and nearly paid for not taking advantage when a stoppage time shot from the home side flew narrowly wide of the goal. Seconds later the referee brought the game to a close and City can now turn their attention to further Cup adventures on Saturday when they take on Chelmsford City at Twerton Park in the FA Cup 4th Qualifying Round.