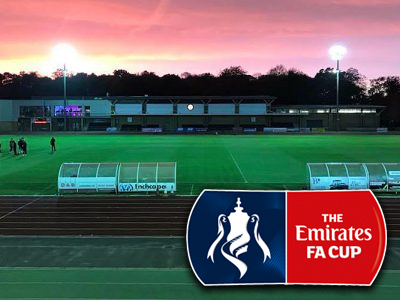 City missed out on a trip to Vanarama National League side Gateshead as a single goal early in the second half was enough to send Chelmsford City into the FA Cup 1st Round at Melbourne Stadium this evening. As in Saturday’s goalless draw at Twerton Park there was very little between the two National League South sides, but West’s deflected shot on 50 minutes after a mis-hit cross found its way right across the box turned out to be the decisive strike. Unlike in the first match it was the Clarets who started strongly and were only denied a 5th minute goal by a goalline block. With a strong wind behind them Chelmsford looked to get the ball forward quickly, which contrasted with City’s passing approach. A quick City break almost saw Braham-Barrett put through his own net on 11 minutes before a serious looking injury to Church saw a lengthy delay to the game. Both sides continued to create openings, with Jack Compton firing a shot narrowly wide and Nat Jarvis’ header drawing a fine save from Beasant. Andy Watkins spurned a great chance right on half-time but five minutes after the restart West lucky effort from Green’s cross broke the deadlock. City still looked to pass the ball around, Watkins failing to hit the target from close range on the hour mark, but the home side were rarely troubled as they looked to sit deep and protect their narrow advantage. And despite a few goalmouth scrambles in the closing stages they achieved their aim with few scares to earn a 540 mile round trip to the North East  in just under two weeks time.