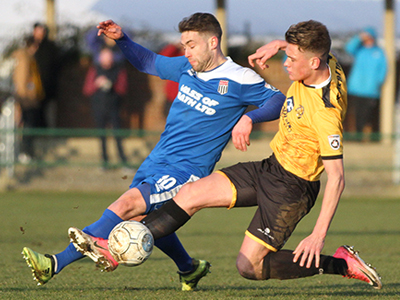 City stayed firmly in touch with the Vanarama National League South play-off positions after a hard-fought 1-1 draw at East Thurrock United this afternoon, despite playing the final 25 minutes with ten men after Sean Rigg’s red card. The game was evenly poised when Rigg dived into a challenge midway in the Rocks half to earn a second yellow card, having been booked somewhat more harshly in the 15th minute. City continued to look for a winner after this but it was the hosts who spurned a golden chance ten minutes from time when a mix-up in the centre-circle allowed Agyemang a clear run on goal only to see his shot deflected for a corner by Luke Southwood’s outstretched leg. Neither side could gain the upper-hand in the first half, not helped by the tricky playing surface and bitter wind blowing across the exposed FutureFuel Stadium. However, it was City who reached the interval ahead, although not without a touch of good fortune. Jack Compton’s 34th minute corner was met first by Rocks no.2 Sammons only for his header to hit Jack Batten and fly back into the roof of the net. The equalising goal came just seven minutes into the second half when a cross picked out Agyemang and he had the time and space to shoot past Southwood. Rigg had come within inches of restoring City’s lead with a well-struck shot five minutes before his early departure and even after this the Romans built several promising attacks only lacking a final pass or shot. In the end though they had to withstand some pressure from the Rocks and had a big escape with Agyemang’s miss.