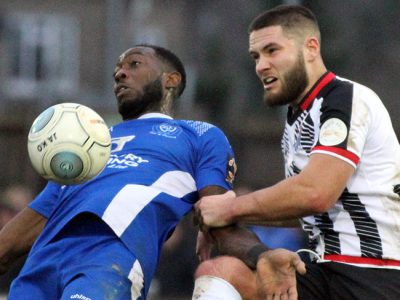 City recovered from two goals down and the dismissal of captain Anthony Straker to draw 2-2 with Chippenham Town in an action packed derby at Hardenhuish Park this afternoon. The home side raced into a two-goal lead with less than 20 minutes on the clock with ex-City striker Nick McCootie at the heart of this opening salvo. He appeared to foul Robbie Cundy in the build-up to his 16 minute strike but the referee failed to notice and his shot had just enough power to beat Ryan Clarke. And four minutes later he got clear again to bundle the ball toward goal where Guthrie claimed the final touch as two City defenders tried to clear. City had shown enough attacking threat despite this double set-back not to panic and just before the half-hour mark neat work from Ryan Brunt and Michee Efete saw the latter tee up Ross Stearn to blast the Romans back into the game. The home side were already looking to slow the game down at every opportunity and this contributed to a scrappy opening to the second half. Frankie Artus and Adam Mann both saw good chances fly just wide and a dipping Stearn free-kick brushed the roof of the net as City’s greater quality slowly began to tell. However, with 17 minutes left a second booking for Straker would have given the Bluebirds renewed hope they could cling on to their narrow advantage. Instead within three minutes City levelled when Mann’s cross was drilled home by Brunt. Knowing, even a man down, they were the far superior side City went in search of the winner, Stearn just failing to connect with Joe Raynes’ cross and Efete drawing a great stop from keeper House, the rebound spinning away from Tom Smith as looked set to pounce. This positive approach allowed Chippenham a couple of half-chances in the final minutes but there was no late drama to cap off the eventful afternoon.