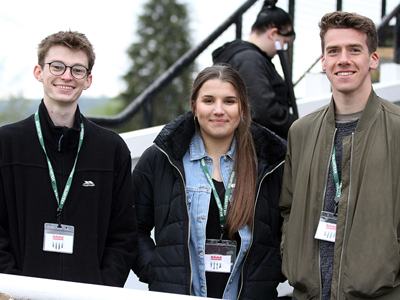 With the start of the new season well underway Bath City Football Club is not only welcoming back its loyal fan base but also its band of dedicated volunteers. As well as the many familiar local faces that volunteer at the club during home games a number of university students also give up their time to help matchdays run smoothly.

Last season University of Bath Sport and Social Science student Jonny Butt helped out at Twerton Park. On matchdays Jonny, alongside other volunteers from the city’s universities and college helped out with the different tasks set by the Club including organising children’s pitchside teams, meeting and greeting matchgoers, organising mascots and stewarding.

Jonny, 21, originally decided to volunteer with the Club as part of his course. He said, “I was tasked with finding a short-term placement in Bath relating to an area of sport that I enjoyed. I instantly contacted Carole at Bath City FC and she gave me a great role as a matchday volunteer. It was such an enjoyable experience that I continued to help out until the end of the season – I was grateful that I managed to find the role. My favourite thing about Bath City is the strong sense of community at the Club. On matchdays everyone is in high spirits and it’s a great set up to be a part of. It’s also exciting to be at a Club that is looking to expand over the next few years. It makes the matchday volunteering enjoyable on a small, social scale as well as a bigger, long term scale. The various volunteers that I have worked alongside are also great people and I am glad to have had the opportunity to meet them and many other people that help to run the Club. I really enjoy volunteering at Bath City FC and it’s been great to see so many people at matchdays as it makes the tasks we do even more important. I’m looking forward to returning to Bath City to help out in the future as they’re a great club with long-term plans for growth and success. In the future I am hoping to take on a bigger role at Bath City. I have discussed several opportunities with them including helping to promote the Club to students at my university.”

Bath City FC General Manager Carole Banwell said, “Volunteers form a key part of the team here at Bath City and we’re eternally grateful to those people who give their time for free to help make matchdays something special. Our volunteers come from all sections of the local community including the city’s universities. We feel it’s important to give young people living in Bath the opportunity to gain experience working with us, helping them to learn a variety of useful skills for the future. On behalf of the Club I would like to say a huge thank you to all of our volunteers who help us, and we’re delighted to welcome them back for the new season.”

Bath City FC are still on the lookout for new volunteers to help with operations on matchdays this season as well as a variety of other roles. Anyone who would like more information or wants to get involved should contact Carole Banwell at the club on 01225 423087.