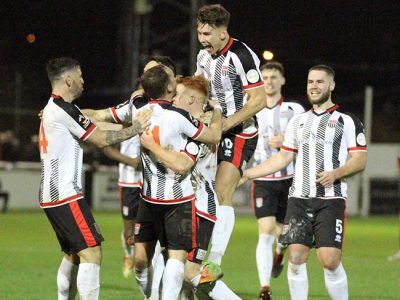 City’s final home game of 2018 was a successful one as an early Anthony Straker penalty and stoppage time strike from Tom Smith saw them overcome play-offs rivals Chelmsford City. Having justifiably been aggrieved by the award of a penalty against them in the reverse fixture back in August – which led to the only goal of the game and a red card for Robbie Cundy that was overturned on appeal – City will have felt a sense of justice when they were awarded a spot kick after just six minutes. There were no appeals as Barnum-Bobb slide in on Ross Stearn as he crossed the ball but referee Mr Gardner spotted an infringement and pointed to the spot. After the majority of the Clarets players failed to get him to change his decision, Straker calmly sent Maynard-Brewer the wrong way to put the Romans in front. City largely controlled the rest of the half without really looking like adding to their lead. Chelmsford began to enjoy more possession in the latter stages of the half and continued to push City back after the interval. Their main threat was from numerous long throws but City dealt well with this aerial bombardment. They had one self-inflicted worrying moment when Ryan Clarke had to pick up a Jack Batten back-pass but the resultant indirect free-kick was blocked. A deflected Adam Mann free-kick was clawed away by Maynard-Brewer as a rare foray forward by City almost saw them double their lead. Mann then fired a low shot inches wide but with around 10 minutes left City had a lucky escape when Wraight crashed a shot against the underside of the bar when an equaliser looked certain. This was as close as the visitors would come and as the game entered the final minute of stoppage time City won a corner which, having initially looked to just keep the ball in the corner, saw Mann cut along the touchline to set up Smith to sweep home from eight yards out.