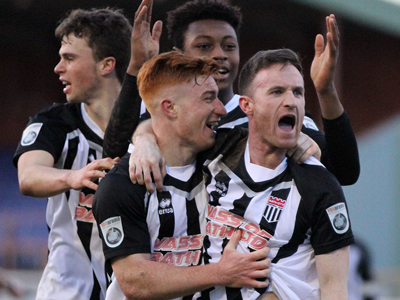 A deserved stoppage time equaliser from Andy Watkins saved City from defeat against Vanarama National League South bottom side Whitehawk at Twerton Park this afternoon. Despite their lowly position the visitors came into the game in good form – with just one defeat in their last seven league games – and after a quiet opening to the game began to show signs of this improvement. Jack Batten had to be alert to hook Benyon’s lob from under his own bar with Luke Southwood beaten but on 23 minutes he couldn’t prevent Ambroisini volleying the Hawks into the lead. This finally appeared to wake City up and they were soon enjoying the upper hand. Several half-chances came and went before five minutes from the interval they were handed the perfect opportunity to level the scores. Jack Compton’s burst into the box was ended by Lyons-Foster’s rash challenge and the referee correctly pointed to the spot. City’s top scorer couldn’t add to his 10-goal tally though, Wilks diving early to keep out his low effort. City had a fortunate escape in the opening minutes of the second half when Pinney somehow managed to shoot against the bar from just a few yards out. From then on City took almost complete control of the game with the Brighton-based side resulting to increasingly desperate gamesmanship to disrupt City’s rhythm. The referee largely saw through these antics – in particular allowing play to continue when Rose went to ground off the ball – although even Whitehawk didn’t kick the ball out of play when they regained possession – and adding on considerable stoppage time for their time-wasting. The introduction of Watkins and Ross Stearn – on the bench after an aborted loan recall from his parent club Sutton United – added further Romans attacking threat but clear-cut chances were still at a premium. Even when Hawks substitute Fagan was booked twice in ten minutes – the first for halting a quick City break with a pull on Stearn then felling Anthony Straker as he set himself to shoot – to reduce his team to ten men it looked as if they would hold out for a vital three points. However, with two of the six additional minutes gone Compton’s cross was headed into the net via a post by Watkins. And City could have won the game moments later when James Morton’s great through ball sent Compton clear but he could only shoot tamely at Wilks.