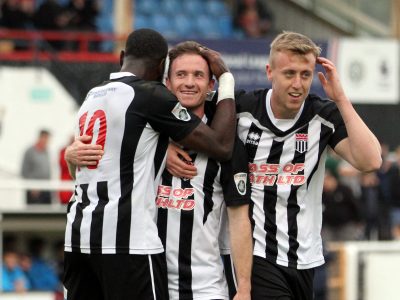 Goals in first and second half stoppage time saw City progress to the FA Cup 4th Qualifying Round at the expense of Vanarama National League South rivals Hemel Hempstead Town at Twerton Park this afternoon by three goals to nil. With just one point separating the two sides in the league it was no surprise the first half was an even, and largely uneventful, affair. City keeper Luke Southwood easily smothered one Kaloczi header and Anthony Straker blocked another well-struck effort. Nick McCootie also had a shot charged down and Andy Watkins looked to have won City a penalty when he was upended in the box but referee Mr Atkins waved away the appeals. Just when it looked like the half would end goalless Straker found space down the left to cross for Frankie Artus to net a rare headed goal. City began the second half brightly but soon Hemel began to press them back. Lyburd’s rising shot looked destined for the top corner before Southwood’s turned it over with a fingertip save and several other chances came and went for the Tudors. City looked dangerous on the break and in the final minute should have added a second only for Jamie Lucas to fire wide of an open goal following great work from McCootie. However, they weren’t punished for the miss as two minutes later keeper Walker could only parry Jack Compton’s shot and Watkins volleyed home the rebound. And in the final minute of stoppage time Lucas made up for his miss, driving home City’s third from 20-yards to ensure the Romans would be in Monday’s draw.