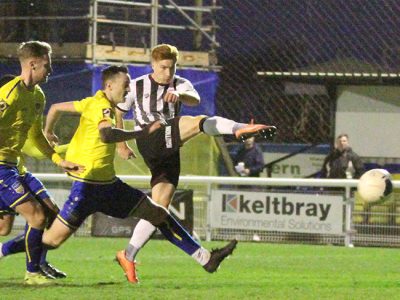 A Tom Smith goal and Ryan Clarke penalty save meant City and Concord Rangers will meet again in the FA Trophy at Twerton Park on Tuesday after a 1-1 draw in Essex this afternoon. The penalty came after just three minutes when Clarke was baffingly adjudged to have fouled Krasniqi despite clearly punching the ball clear before contact was made with the player. However, justice was done as Clarke parried Nouble’s penalty on to the post. Krasniqi then headed a great chance over as the hosts continued their bright start to the clash. The game settled down after this and it wasn’t until around the half hour mark City began to threaten as in quick succession, Sam Pearson raced clear only for Haigh to block his shot and then Smith crashed a shot against the post. The half ended with the 4th official replacing injured referee Mr Reeves. City began to look more threatening after the interval, Haigh denying Ryan Brunt and Sam Pearson shooting against the outside of the post, although the Beachboys still looked dangerous when they got forward. They had an escape on 69 minutes when Pearson was brought down by last defender Pollock on the edge of the box but somehow the referee and linesman missed the foul and eight minutes later it was the lucky Concord player who headed home at the far post to put his side in front. The lead lasted just over a minute though as the ball broke to Smith from Brunt’s shot and he made no mistake from 10 yards. Both sides had chances to win the game after this but couldn’t take them so will meet again in Bath on Tuesday evening.