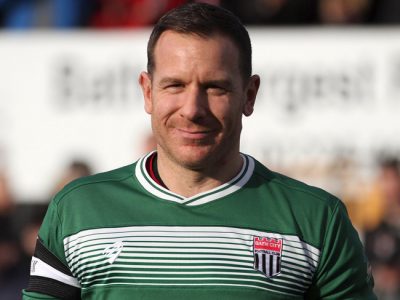 Bath City team captain, Ryan Clarke, has sent his thanks to the Roman Army for donating so generously to the Club’s Promotion Play-Off Crowdfunder campaign. As at 3pm, 48 hours since we kicked off, the total stands at £25,439 with 429 people having donated. The donations also mean the Club will give more than 1,250 free match tickets to NHS staff next season on behalf of you, our fans.

Ryan asked us to pass on this message: “On behalf of myself and all the players I would like to thank all the supporters,and everyone else who has donated to the cause in these extremely tough times, to help support our Club’s promotion push. To raise such an amount in such a short space of time Is appreciated so much by all the players and everyone else at our Club, and a credit to you all as supporters of Bath City and of football!  We will do everything we can on the pitch in trying to bring you and the Club success.”

Ryan went on to add, “I’d also like to thank fans of Bristol Rovers and their Chairman who are now pitching in with donations. I started my career over there and know just how strong the bond is between the clubs from the ten years Rovers spent at Twerton Park. Thanks Gasheads!”

Head over to our Crowdfunder page to find out more or make your own donation.