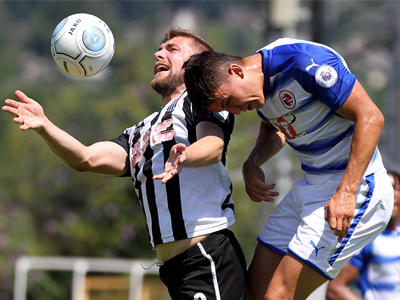 City opened their pre-season campaign with a single goal win over a Reading U23 side at a baking hot Twerton Park this afternoon, trialist full-back Michee Efete netting the winning goal just after half-time. Despite the conditions the match was played at a competitive pace with the visitors fashioning the first effort on target, Ryan Clarke blocking Osho’s low shot. City soon began to enjoy the better of the game but found a familiar face keeping them out, last season’s player of the year Luke Southwood producing several fine saves. A number of other chances flew narrowly wide but just three minutes into the second half City deservedly went ahead. The Royals had changed all eleven players at the interval and they had barely settled when Efete looped a corner into the net via his right knee. City had also made six changes and one of these, Robbie Cundy, was unluckly not to double their lead when his downward header bounced over the bar midway through the second period. City continued to look the likelier to add to the scoring, as they maintained a good pace right up to the final whistle, but would have taken much from an excellent opening work-out.