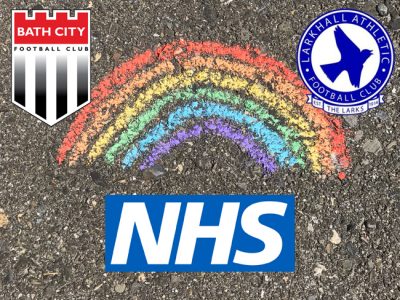 Larkhall Athletic FC and Bath City FC have agreed that they will play a fundraising game for NHS and critical workers as part of their pre-season preparations for the new season.  The game will be played at Larkhall’s ground on a date to be confirmed once the new season arrangements are known.

Not only will this be a great opportunity for the Clubs and their supporters to show their appreciation of the tremendous service being provided by the NHS and critical workers, but also with both Clubs looking to build on their strong performances of last season, it will be an opportunity to see how the new squads and players will fare in the forthcoming season.

Larkhall Athletic Chairman – Paul Rankin stated “We are delighted that Bath City have agreed to this game so that in a small way both clubs can thank NHS and critical workers for the dedication they have shown. We look forward to inviting the workers and supporters to Larkhall Athletic for what should be a great community event”.

Bath City Football Chairman – Paul Williams stated “As soon as this game was suggested by our friends at Larkhall we thought it a great way for Bath to show its appreciation and thanks to all those who are giving so much for us. We look forward to the day when both teams can come together and personally thank them”.