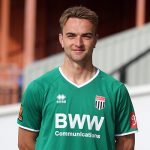 Goalkeeper Will joined City in September 2020. He began his career with Bristol City before joined the youth set-up at Swindon Town. Will spend five seasons at the County Ground, making 10 first team appearances interspersed amongst a number of loan spells at Southern League and National League South/North level. He was released by the Robins at the end of the 2019/20 season.