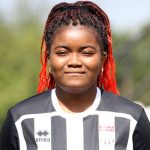 Playing history: i have been playing football since I was young but joined teams much later when I was a teenager. I have previously played for Bath City girls team , Melksham under 18s and the Bath City Academy team

Best footballing memory: When I was playing for Bath City girls’ team, we had a tournament at Twerton Park. It felt like a privilege to play at Twerton Park as many teams don’t get the opportunities to play at a stadium.

Footballing idol:- Steven Gerrard, partially because I’m a huge Liverpool fan and because he always gave 100% in all games, and also he started in the Liverpool Academy then played in the first team for many years, even becoming the Captain which will definitely have been an inspiration to many young footballers.

How I spend my free time: Meeting with friends, watching Netflix , playing football, going out for food