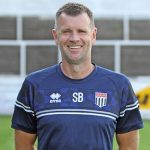 Vastly experienced goalkeeper Steve joined City in August 2021 as goalkeeping coach. He played well over 800 games during his playing career, for a number of clubs in and around the West Country, including a short spell with City, although he didn’t make a first team appearance. He enjoyed the greatest success during seven seasons as first choice keeper at Cheltenham Town between 1997 and 2004, helping them to promotion into the League, a F A Trophy win, then into Nationwide Division 2 via the playoffs in 2002. His career at Cheltenham also seen him win England semi-pro honours and named in the Conference Team of the year 98/99. He returned to Whaddon Road between 2010 and 2012 at the end of his playing career before switching to a coaching position with the Robins. He spent 11 years in this role before leaving and joining former teammate Jerry Gill at Twerton Park. Steve is also the nephew of former City player and Manchester City legend Tony Book.