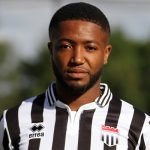 Striker Scott is now in his second spell with City, having returned to the club in July 2022, although he is probably best known at Twerton Park for the 90th minute goal he scored against the Romans for Weston Super Mare in March 2016 that preceded Tyler’s Harvey famous stoppage-time double. After starting his career in the youth set-up at Bristol City he played for a number of West Country non-league sides, including a short spell with City during the second half of the 2013/14 season, before joining Eastleigh in the summer of 2016. He spent a year on the south coast before moving to Macclesfield Town where he spent two successful seasons, scoring 25 times in 76 games. He joined Oldham Athletic in July 2019 before having spells with Notts County, Dagenham & Redbridge and Aldershot Town.