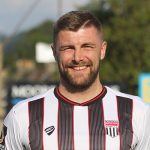 Forward Ryan was on the books of both Bristol City and Stoke City as a youth. A serious knee injury with the latter set his progress back and when he returned to fitness he spent loan spells at Nantwich Town, Luton Town, Tranmere Rovers and Leyton Orient. In January 2013 Ryan joined Bristol Rovers on a two and a half year deal. He struggled to hold down a regular first team spot at Rovers, spending time at York City and Stevenage on loan, and moved on to Plymouth Argyle in January 2015. However, another knee injury six weeks later saw him sidelined for nine months. He was released at the end of the 2016-17 season and joined Exeter City but found first team openings limited at the Grecians and, with a successful gym business in Devon, opted to move into part-time football with City in July 2018.