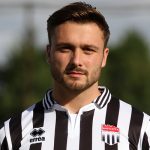 Former Oxford City academy player Rex spent a season with Bristol Manor Farm before joining Frome Town midway through the 2018/19 season. The right-sided midfielder spent five seasons in Somerset where he became a firm favourite with the Robins fans. Was given the chance to make the next step in his football career when City signed him in July 2022.