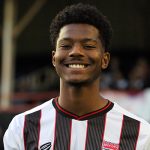 Owura is the younger brother of former City player, Opi Edwards. He followed his sibling to Twerton Park in August 2019 on a season long loan deal from Bristol City. The 18-year old winger had been part of Newport County’s youth set-up before the Robins signed him in July 2019.

Click here for a gallery of Owura Edwards pictures