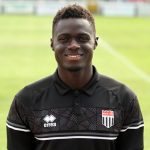 Gambian born Mo came up through the youth ranks at Newport County, signing his first professional contract in April 2018. He had already spent time on loan at Merthyr Town before making his first team debut for the Exiles against Carlisle United in the final game of the 2017/18 season. In July 2018 Mo joined Welsh Premier League side Barry Town United on loan until the end of the 2018/19 season. He scored 14 goals for Barry in all competitions and he was selected as the Welsh Premier League Young Player of the Year. A brief loan spell with Torquay United at the start of the 2019/20 season was followed by a return on loan to Barry. The Welsh U19 and U21 international was released by Newport County in May 2020 and, after a successful trial, joined Salford City as part of their development squad. Another successful loan period last season, this time at Marine, saw him score six goals in 13 games and he joined City on a six-moth loan deal in August 2021.