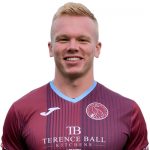 Midfielder Matt was on the youth books of his home-town club Yeovil Town before spending the 2015-16 season with Weymouth. He joined Taunton Town in July 2016 where, a apart from a short spell at Gosport Borough at the start of the 2017/18 season, he enjoyed three successful years. This earned him a move to National League side Torquay United in July 2019. He joined City on a month loan deal in October 2020.