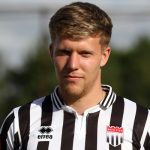 Bristol born midfielder Luke began his career locally with Mangotsfield United and Yate Town. He joined Taunton Town in January 2020 before moving into the professional game in September that year with Grimsby Town. He made 20 appearances, scoring once, for the Mariners during the 2020/21 season but began the next season with a loan spell at Boston United. In November 2021 he switched to Spennymoor Town on loan for the rest of the season. He was released by Grimsby in June 2022 and returned to the West Country to sign for the Romans the following month.