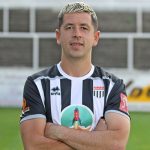 Experienced midfielder Lloyd joined City from Forest Green Rovers in February 2020. He began his career in the youth ranks at Southampton, helping the Saints reach the final of the FA Youth Cup in 2005, and went on to make approaching 100 appearances for the South Coast club. He joined Colchester United in July 2010, where he spent two season, including a short loan stint at Crawley Town. Successful spells with Leyton Orient, Exeter City and Forest Green followed, and Lloyd has now played well over 350 professional games. The 33-year old also represented Wales at U17, U19 and U21 level.

Lloyd is currently on loan at Taunton Town.

Away Kit Sponsor: “Every Time Ref!”