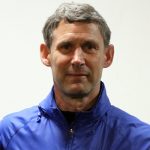 Former Bristol Rovers defender Billy has been City’s U18 Academy Coach since 2009. He spent the majority of his playing career with the Gas, having initially been a trainee at AFC Bournemouth, making over 250 appearances between 1987 and 1997. During that time he also played three times for the Romans during a brief loan spell in February 1991. After leaving Rovers he went on to play for Exeter City, Forest Green Rovers, Newport County, Weston Super Mare and Clevedon Town. After retiring in 2007 he returned to Bristol Rovers as a youth coach before joining City.