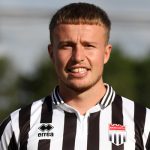 Central defender Jordan initially joined City on loan from Exeter City in October 2021. He came up through the youth ranks with Exeter before signing his first professional contract in April 2018. The 22-year old had loan spells with Bideford, Tiverton Town, Chippenham Town and Yeovil Town, before joining the Romans. He signed permanently for the Romans in June 2022 following his release by Exeter.