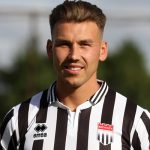 Midfielder Joe joined City in July 2018 after a successful pre-season trial. He had spent a short spell with City’s U18 side before going on to play for Odd Down and Larkhall Athletic. After two seasons at Plain Ham he joined Frome Town in July 2017 and was an immediate hit with the Southern League side, going on to be named their player of the season and earning his chance with the Romans. The Bath born player immediately settled at the higher level, playing mainly at right-back, and became a firm favourite amongst the Twerton Park faithful. Continued this form during the 2019/20 season before suffering a broken leg in March 2020. A series of complications with the injury saw Joe sidelined for the whole of the 2020/21 season but he made a very welcome return to action during the 2021 close season. Joe spent a short loan spell at Yate Town in August 2021 to regain match fitness before returning to Twerton Park, where his performances earned him the 20/21 managers player of the season.