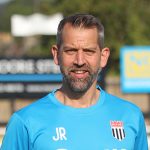 When Birmingham born Jim arrived at Twerton Park on his 26th birthday from Merthyr Tydfil it was his third spell with City, although the first time he had actually signed for the club. Two previous loans periods during the 1996-97 and 1998-99 seasons saw him make five and four appearances respectively. Made his debut against Kettering Town in January 1997 during that first spell but soon returned to Cardiff City. Spent two seasons with the Ninian Park club, making 35 first team appreances, after beginning his career as a trainee with Walsall. Left Cardiff in the summer of 1998 for Conference side Forest Green Rovers but never secured a regular starting place and spent just one season at The Lawn before heading for Clevedon Town. Spent two years there but following the clubs relegation back to the Western Division moved back into Wales with Merthyr Tydfil. Another season of struggle followed as the Martyrs headed the same way as Clevedon and, despite being offered the captaincy of the Welsh club, Jim switched to City in May 2002. Now one of the most popular players at City amongst both teammates and fans, he was named player of the year in 2004-05, he has passed the milestone of 450 games, putting him in 4th place of highest appearances for the club. Jim briefly joined Chippenham Town in December 2012 but returned to City ten weeks later. In February 2016 he was named assistant manager.