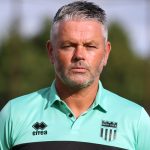 Jerry was named as manager of Bath City in October 2017. This marked a return to Twerton Park having played well over 200 times for the club between 1990 and 1996. He began his career with Trowbridge Town before spending 18 months at Leyton Orient without making a first team appearance. He dropped back into non-league football with Weston Super Mare from where he joined City in December 1990. Was soon a regular in the side, both in midfield and at right-back, before moving onto Yeovil Town in July 1996. He spent just one season with the Glovers, helping them will promotion to the Conference and earning a call-up to the England National Game XI side. This attracted then interest of 1st Division Birminghan City, who paid £30,000 for his services in July 1997. During his five seasons with the Blues they reached the League Cup Final and won promotion to the Premier League. After a loan spell with Northampton Town he joined them permanently in November 2002. A serious knee injury sidelined Jerry for the first half of the 2003-04 season and when he returned to fitness he joined Cheltenham Town in February 2004. He went on to spend four seasons with Cheltenham Town, helping them to promotion to League One via the play-offs. He made his first move into coaching with Forest Green Rovers in October 2008 before bringing playing career to a close at Redditch United for the 2009-10 season. In January 2010 he was named as Weymouth manager but, with the club already in financial meltdown, he resigned after 44 days. Since then he has held roles at Bristol Rovers, Birmingham City and Kidderminster Harriers, with his major appointments being at Norwich City as U18 and U23 Coach and then Wolverhampton Wanderers as U18 Coach. Jerry has held the FA UEFA A Coaching Diploma for 5 years.