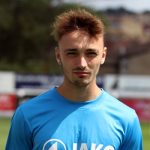 Attacking midfielder James is a graduate of City youth academy. He made his first team debut in the Somerset Premier Cup during the 2016-17 season before adding a further four outings, including a league debut at Dartford, during the 2017-18 campaign. He continued this progress by signing a first team deal for the 18/19 season. James spent the majority of the campaign out on loan with Keynsham Town and Mangotsfield United but re-signed for the Romans in the 2019 close season.

Currently on loan at Yate Town.

Click here for a gallery of James Ollis pictures