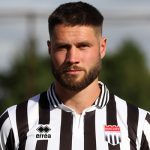 Tall centre-back Jack came through the youth ranks with Bristol City having joined the club’s Academy at the under-13 stage. In March 2013, aged just 17 and a year into his two-year scholarship, he signed his first professional deal with the Robins, having already captained the Under-18 and Under-21 sides. His performances reportedly attracted interest from several top flight sides but he hadn’t made a first team appearance for the Ashton Gate side when he joined City on loan in November 2015. He made 11 starts during three months at Twerton Park before returning to Bristol. However, he was released by Bristol City a couple of weeks later and returned to City for the remainder of the 2015-16 season before signing permanently in June 2016. He missed the whole of the 2019/20 season after suffering a serious knee injury in pre-season but returned to action in August 2020 and is now the club’s longest serving player with well over 200 appearances for the Romans.