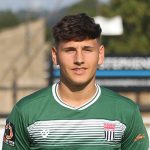 Promising teenage goalkeeper Harvey was promoted to the first team squad as cover to regular no.1 in November 2018. He made his debut against Welton Rovers in the Somerset Premier Cup later that month and made a further two first team appearance that season. The cousin of teammate Joe Raynes, Harvey retained this role for the 2019-20 season.