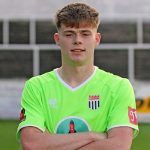 Teenage keeper signed for the Romans in July 2021 and will spend the season on loan at Clevedon Town to further his development. The 18-year old has also played for Wells City in the Western League and was selected for the English Colleges National team in February 2021.