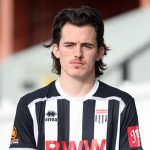 Left-back Freddie began his football career with Oxford United. He spent loan spells at Margate and Farnborough before joining Oxford City in June 2016, where he enjoyed two successful seasons before moving on to Wealdstone. A year later he switched to Maidenhead United but injury restricted his playing time with the Magpies and he spent time on loan at Hemel Hempstead Town during the 2019/20 season before joining City in September 2020.