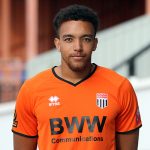 Striker Donovan came up through the youth ranks at Bristol Rovers before signing his first professional contract in May 2014. Despite not making a first team appearance he joined Wolverhampton Wanderers, initially on loan then permanently in November 2014. He spent three and a half seasons at Molineux, with loan spells at Port Vale, Jumilla in Spain (along with eight Wolves teammates) and Exeter City. He was released by Wolves at the end of the 2018/19 season and returned to Spain to join Segunda División B side Burgos. The 23-year old was back in England in February 2020 to join Macclesfield, making five appearances before the premature ending of the season. He joined City in September 2020.