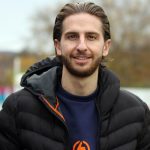 Forward David signed for City from Yate Town in November 2021. A product of the youth set-up at Filton College he began his career with Chipping Sodbury Town before joining Paulton Rovers in 2017. The 25-year old then joined Yate Town and was the club’s top scorer during their 18/19 promotion campaign. He re-joined Paulton Rovers the following season before returning to Yate in July 2020.