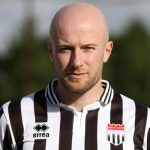 Left-back Danny signed for City from Chippenham Town in June 2022, marking a return to the club having spent the second half of the 2015/16 season at Twerton Park on loan from Bristol Rovers. He came up through the youth ranks at the Pirates, also spending loan spells with Mangotsfield United, Truro City, Gloucester City and Weston Super Mare. When he was released by Rovers in May 2017 he signed permanently for the latter of these clubs. After a season at Woodspring Park he moved on to Hereford before joining Chippenham Town in July 2020.