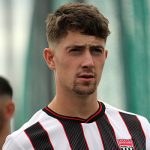 Midfielder Dan joined City on a short term deal in August 2019. He had found himself without a club after spending pre-season with Bury. When the club failed to start the season, eventually being expelled from the Football League, he headed back south to Twerton Park. He had begun his football career with Plymouth Argyle before joining Truro City on loan for the 2018-19 season. He was released by the Pilgrims in May 2019 ahead of his ill-fated spell with Bury.