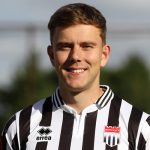 Midfielder Dan came up through the Exeter City academy system but was released in July 2015. He moved to Canada to St Francis Xavier University in Nova Scotia on a scholarship deal in 2015, playing for StFX Soccer X-Men, and then joined Calgary Foothills in 2017. Dan returned to the south west on completion of the football scholarship in August 2020 and joined Tiverton Town. He signed for City in July 2022.