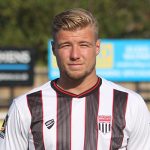 Left-back Connor came up through the junior ranks at Exeter City before signing his first professional contract in April 2014. He made his full debut for the Grecians in August 2014 and went on to make 14 first team appearances for the club. Following two loan spells with Truro City he joined the Cornish side permanently in August 2017. He played nearly 100 games during two years with the White Tigers and was named player of the year in both seasons. Connor joined City in July 2019.